Having his first start after a spell Calypso Reign was too good for his opposition when he took out the 1200 metre opening race at Morphettville on Saturday. Mentored at Goolwa by David Jolly and guided to victory by Kayla Crowther Calypso Reign  came from a near last position with a strong run over the concluding stages.

Coming off a last start second Does It continued the good run of the Richard and Chantelle Jolly stable when he took out the 2025 metre second race.

Having the services of stable rider Jake Toeroek, Does It came from the rear of the field with a sharp run over the concluding stages.

Co-trainers Richard and Chantelle Jolly brought up the second leg of a running double when Rodeo took out the 1050 metre third race.

Having the services of Callum Murray Rodeo began well settled in a midfield position before dashing to the lead in the shadows of the post.

Ridden by Caitlin Jones who rode with success in Dubia, My Mate Sonny  started well and continued in a forward position going on to win.

The Two-year-old filly See You In Heaven  presented Richard and Chantelle Jolly their third winner for the day when she took out the listed Dequetteville Stakes which was run over 1050 metres.

Giving Jake Toeroek his second winner for the day See You in Heaven came from a midfield position to win the time-honoured juvenile race.

Having the services of apprentice Will Price Foz D'Or as well placed in a forward position before going on to win.

The father and son training combination of Peter and Paul Snowden may have a good filly on their hands for the future after My Whisper  took out the Group 3 Auraria Stakes which was run over1800 metres.

Bringing up her fourth straight success in just five starts the Malcolm Poy guided My Whisper came from well back to contend a closely fought out finish.

My Whisper will have her next race-day outing in the Group 1 Australasian Oaks of 2000 metres at Morphettville on Saturday April 30.

Murray Bridge based co-trainers Daniel Clarken and Oopy McGillivray were well pleased with the win of Harleymoven in the listed Port Adelaide Guineas which was run over 1800 metres.

Bringing up successive wins the Ryan Hurdle guided Harleymoven was handy to the lead throughout the stakes race.

Campbell Rawiller continued his good success rate since coming to South Australia when he rode Aston Rapova to victory in the 1100 metre final event.

Jointly trained by Wayne Francis and Glen Kent at Strathalbyn Aston Rapova came from well back with a strong and confident run in the straight. 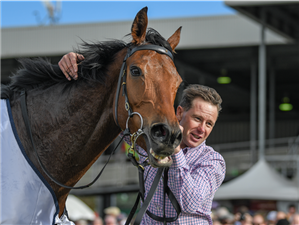