Group 1 winner The Mission (Choisir) was retired to stand at Aquis Farm’s Queensland base the winner of two of his 19 starts and was introduced at stud at a fee of $13,200 (inc GST).

The son of emerging sire of sires Choisir (Danehill Dancer) finished fourth in the Pago Pago Stakes (Gr 3, 1200m), before landing his first victory in the Schweppervescence Handicap (Gr 3, 1400m).

The Mission’s biggest moment on the track came when he took out the Champagne Stakes (Gr 1, 1600m), beating fellow Aquis Farm stallion Invader (Snitzel) by a decisive three and a quarter lengths.

Purchased by his trainer Paul Perry for $32,500 at the 2016 Magic Millions Gold Coast Yearling Sale, The Mission is out of winning Redoute’s Choice (Danehill) mare My Amelia, making him a half-brother to Group 3-placed Smart Amelia (Smart Missile).

In winning the Champagne Stakes, The Mission emulated his second dam Carry On Cutie (More Than Ready), who landed the Group 1 in 2005.

Further back the stallion hails from the same family as Group 2 winner Vinicunca (I Am Invincible) and stakes-placed pair Prete A Partir (Choisir) and Black Cuban (Blackfriars). 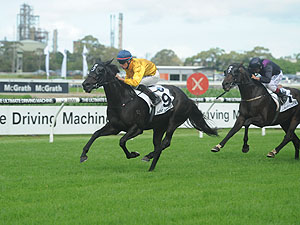