Returning to Australia at the conclusion of this season, Shinn savoured his third Group 1 crown this term and a running treble on the card, while Whyte also sealed his third top-level win this campaign after Stronger's G1 Centenary Sprint Cup (1200m) triumph.

"The big races in Hong Kong are so prestigious and well recognised around the world, so to be competing is one thing; to be winning them, is another. We're on the world stage now and to win such a prestigious race, I feel like I'm on top of the world right now," Shinn said.

Without blinkers for the first time this season, the Galileo gelding was dropped out to settle clear last at the jump, like in the past, while Nordic Sky  charged forward to lead.

Shinn made his move in the home turn, peeling out to pop the question and the five-year-old responded with a withering burst, hitting the front with 200m left to lead Ka Ying Star by a length and three quarters, while Senor Toba closed for third.

"To win two Group 1s on him now and to win the last Group 1 in Hong Kong (of the season) is real big buzz, I tell you," Shinn said. "It's a team effort and it's a really big thrill to win today."

"I must thank Douglas because after his last run at 2000 metres, he pulled quite hard and I thought going to 2400 metres, we're not going to win if he pulls.

"So, I suggested considering taking the blinkers off. Douglas stewed over it, he thinks about it very carefully and he said it was the right call and honestly the horse switched off the whole race and his turn of foot is electric when he switches off," Shinn said.

"It's the longest 2400 (metres) of my life. When you're a jockey, things unfold and you can see them unfolding in front of you but when you're standing on the side and watching it, it gets quite daunting.

"He showed that he has got a really good turn of foot for a stayer. If he can continue to race in this sort of form and with these racing manners, he's an exciting horse for all these staying races next season," Whyte said.

Out of the champion Australian mare Atlantic Jewel, Russian Emperor boasts a rating of 122 in Hong Kong.

"He is part of the family. I learned in my time as a jockey that you can get on one good horse one season and you might not get another good one for three seasons, so when you get a champion in your hands, you take care of him and there is pressure involved but I love and thrive on pressure, it's one of the things that keep me going but at the same time, you still have to get the horse to the races and perform, same as a jockey.

"The reason the pressure is there with him is I don't know when the next one will come along. When you get one, you care for them and you try to present them in the best possible form when they step out," Whyte said.

Russian Emperor will now take a break until next season, expected to follow a similar pattern of races as this term including a tilt at the 2022 LONGINES Hong Kong International Races.

"He's a much more rounded horse, you can see in his racing patterns and mannerisms that he can go to sleep and any horse that can do that over this kind of trip and has a good turn of foot, they'll stay even further. It's the first 600 to 700 metres that's critical and he literally went to sleep. If he can do that, he'll be very competitive in the big races next season.

"The reason for the improvement is that he was a younger horse, still on the up and maturing. He had gone through a big stage of his career with the pressure of Hong Kong and he hadn't quite adapted to the firmness of the ground. I think he had a lot of things against him leading into this race last year but we've come out on top this year.

"There's a lot of people I have to say thanks to especially the owners. They have stuck by me and been the biggest supporters."

Shinn's run of form across the last three race meetings has returned two doubles and one treble, enhancing his overall figure this season to 36 wins.

"I've had some great support since I came to Hong Kong and I've taken time to adjust but this season I really feel like I've started to figure what's required to compete at the top level. I've got some great support on and off the track and it's been rewarding to repay everyone who's stuck by me because it's taken a bit to get where I am now and I'm sure everyone who's been on this journey is really satisfied," he said.

"It means a lot. It was a tough decision to go home (at the end of the season). The last year has been an extremely tough time, especially for myself. It was almost a breaking point. I made the decision because I was pretty much battling there mentally.

"Hong Kong has been a great place for me but for a few months there, it was really tough – not just for me, but a lot of people in Hong Kong. It's hard to walk away because I've worked so hard, but mental health is very important.

Hong Kong racing continues this Wednesday (25 May) at Happy Valley. 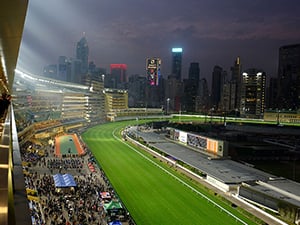