Rose Crescent isn’t letting her lack of stature get in the way of fashioning a tidy racing record for trainers Ken and Bev Kelso.

The diminutive four-year-old has been taken along quietly by the Matamata husband and wife team and patience was further rewarded when she charged to a last-start victory at Te Rapa over 1300m on Saturday.

Rose Crescent  had broken her maiden over the same course and distance earlier in the year and her versatility is highlighted by her victories posted on a Good3 track and most recently on a Heavy8 surface.

Her last appearance was the second of her current campaign, having finished fourth when resuming when she had nothing go her way.

"She's making good progress and she was unlucky at her previous start. She got held up and flew home late," Ken Kelson said.

"We were quietly confident that she would be very competitive on Saturday with a clear run at them.

"She has been consistent all the way through, but she's been very immature and is not overly big so it's taken a while for her to strengthen up and is still doing so."

Rose Crescent has only had seven starts, but two wins and five placings emphasises both her talent and genuine nature.

"There's not much of her, she's small and petite and hopefully she will keep improving and should go further too, the way she races."

By boom sire So You Think, Rose Crescent is raced by co-breeder Matthew Oram and his wife Elizabeth, who divide their time between New Zealand and Hong Kong, with a Hong Kong-based partner.

The partnership also raced the dam Petty Cury, a daughter of Not A Single Doubt who was successful on six occasions for trainer Don Sellwood, including the Gr.3 Darley Plate (1200m).

Stable star and two-time Group One winner Levante is enjoying a quiet period before she returns to build up for Melbourne spring carnival engagements with the Gr.1 Empire Rose Stakes (1600m) a prime target.

It would be the Proisir mare's second Australian trip with a return fuelled by her performance for fourth in the Gr.1 Newmarket Handicap (1200m).

"She is still spelling and won't be back until late June. Les Crayeres is another one who is out spelling," Kelso said.

Multiple winner Les Crayeres was genuine during her last campaign with two runner-up finishes and ran fourth at Group Three level in both the Cuddle Stakes (1600m) and Manawatu Breeders' Stakes (2000m).

Meanwhile, capable mare Shoshone is a proven winter performer with five of her six career wins posted on heavy going.

She was twice successful during her last preparation and may resume in Saturday's Haunui Farm Handicap (1100m) at Pukekohe on Saturday.

"She was supposed to have trialled at Taupo the other day, but they were called off, so she had a jump-out here last Thursday and she's well," Kelso said. 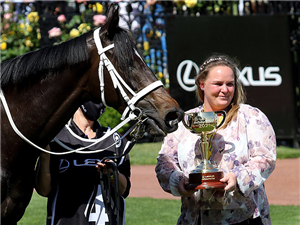