Group One winning galloper Mascarpone was amongst the pointy-end of the market when the TAB released futures odds for the Hawke’s Bay Triple Crown earlier this week, but punters should tread warily.

The flashy chestnut suffered a suspensory injury during an exhibition gallop at Ellerslie ahead of a possible tilt at the Gr.1 Bonecrusher New Zealand Stakes (2000m) back in March and co-trainer Graeme Rogerson has confirmed he won't be seen at Hastings in spring.

"He won't be at the Tarzino Trophy (Gr.1, 1400m). He may be back in time for Christmas racing but I think he might even be a full 12 months off," Rogerson said.

"He looks beautiful, I had a look at him the other day. We had to keep him confined for the best part of three months and he is out in the paddock now but he definitely won't be at the Tarzino."

Another on the comeback trail is smart filly Princess Lowry, whose career looked all but over when she fractured her cannon bone in the Gr.2 David & Karyn Ellis Fillies Classic (2000m) at Te Rapa.

By Roc De Cambes, Princess Lowry was luckless when placed in both the Gr.2 Eight Carat Classic (1600m) and Gr.2 Royal Stakes (2000m) over the Christmas Carnival at Ellerslie.

"She is in pre-training now. I am racing her with Gerry Harvey and at this stage she is going to Chris Waller," Rogerson said.

"When you look at the x-rays now, you wouldn't believe how good it looks."

Meanwhile, Rogerson will have a number of runners at both Tauranga and Rotorua over the weekend and expects bold showings by Logan's Logic and last start winner Golden Hue on Saturday.

"I think Logan's Logic is a really good chance and Vinnie Colgan rides him on Saturday. He got knocked down at the start last time at Ruakaka with the apprentice on, but he has the makings of a good horse," Rogerson said.

"Golden Hue is also a big chance and stays in Rating 65 grade. Ottavio and Roc Cha should both run well at Rotorua on Sunday." 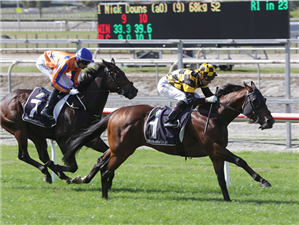