Apprentice Teodore Nugent has outridden his metropolitan claim with a win at Caulfield.

And it was fitting that Nugent should outride his claim on the Ken Elford -trained galloper as Nugent grew up in the Warrnambool area.

Elford provided Nugent with some winners early in his career before the young jockey moved on to become an apprentice with the Ciaron Maher and David Eustace stable.

A $3.50 chance in betting, Ashford Street ran away from the $2.25 favourite Starry Legend in the straight to score by two lengths with Tycoon Humma ($26) a short-neck away third.

"It's been a long time coming," Nugent said.

"I've been riding just over four years now and to finally finish my apprenticeship and on a horse of his ability, it means a lot.

"It's been unreal. I've known Kenny pretty much all my life down in Warrnambool."

Saturday's victory was Nugent's 274th after starting out his career at Casterton in September 2017 while his first winner came the following month at Seymour.

To date Nugent has one Group 1 to his name, sharing a dead-heat victory aboard Portland Sky in the 2021 Oakleigh Plate (1100m) at Caulfield.

Nugent said it had been a great training effort by Elford to have Ashford Street fresh enough for Saturday's win after the gelding was beaten at Flemington on May 14, nine days after winning at Warrnambool during the Three-Day Carnival.

"Each time he's turned out, he keeps delivering," Nugent said.

"The world's his oyster, the best is yet to come, we'll only see the best out of him next prep."

"For Teo Nugent to outride his claim..."

Ashford Street pounced & raced away to score at Caulfield. @MelbRacingClub 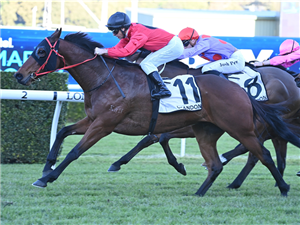