St Kilda skipper Jack Steele will make a timely return from a shoulder injury as his teams heads to Sydney to face the Swans after two recent losses.

Coach Brett Ratten is warning the return of skipper Jack Steele won't be a magic elixir for the Saints' recent AFL woes as they prepare to tackle Sydney on Saturday night.

Ratten said on Wednesday that the dual all-Australian midfielder was a certainty for the SCG clash as St Kilda look to arrest a two-game slump.

Last round the Saints were shock 35-point losers against lowly Essendon, with Ratten saying he hoped the poor performance had shocked the team into gear.

Steele has made a speedy recovery from shoulder surgery, only missing four games and will add some much needed intensity around the ball, which was lacking against the Bombers.

Wingman Daniel McKenzie is also set to return after suffering a concussion.

But Ratten said the team couldn't expect Steele to be the difference against a Swans side also smarting after a sloppy loss to Port Adelaide.

"Some of our work around the stoppage and the contest has been down over the last couple of weeks and he excels in that part of the ground," Ratten said.

"But it's not like we get Jack back in and it fixes it.

"He's one part of it, and with his leadership I think he will influence others and give them confidence as well and I think that will help the group."

Ratten wanted to see an improvement in defence, describing it as their worst showing in that area for a long time.

"Just allowing the ball to flow from one end to the other so easily, that hasn't been us," he said.

"We should respond with a real intensity and attitude and that doesn't guarantee us a win but it puts us in the game."

Ratten was asked about errant Magpie Jordan de Goey, who has been linked to St Kilda - a move backed by Saints great Nick Riewoldt.

Coming out of contract at the end of the season, the 26-year-old's talks with Collingwood have been put on hold after his controversial antics in a video filmed on a Bali break during the bye.

Ratten didn't rule out recruiting the gun midfielder but said St Kilda would have to do its due diligence.

"We'd have to do our homework and have a look at exactly what has happened and taking in all the evidence," he said.

"So we take in both sides of the equation, and then we make decisions around there." 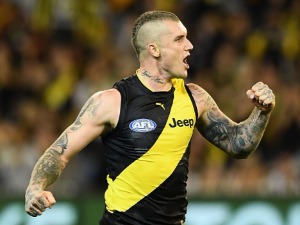