Scott Boland has taken four wickets in a red-ball match for Australia A against Sri Lanka A, showing selectors he is ready for the Tests if called upon.

Scott Boland has shown selectors he is ready if required in Sri Lanka, taking four wickets in the final warm-up match for an Australia A side before the Test series.

Boland claimed 4-38 on the opening day of the second unofficial Test against Sri Lanka A, with the hosts going to stumps at 9-330 in Hambantota.

The Victorian is the only member of Australia's Test squad featuring in the match, as one of four quicks behind Pat Cummins, Mitchell Starc and Josh Hazlewood in the main group.

Fellow quick Mark Steketee also bagged 4-69 on Tuesday, including the scalps of each of Sri Lanka's top three.

But there was less good news for selectors on the spinning front.

With Mitchell Swepson yet to completely nail down his spot as Australia's second spinner after two tough Tests in Pakistan, neither Tanveer Sangha nor Jon Holland truly delivered.

Sangha finished with 0-68 from his 15 overs while Holland had it slightly more difficult with 0-91 from 19.

Young Victorian tweaker Todd Murphy did not play in the match, after claiming four wickets in the first red-ball match against Sri Lanka A.

Swepson travelled to Sri Lanka as the incumbent second spinner to partner Nathan Lyon, but his lack of game time in white-ball matches has raised eyebrows.

With Adam Zampa back home in Australia on paternity leave, Swepson was overlooked for the fourth ODI again on Thursday and has played just one of six limited-overs matches in Sri Lanka so far. 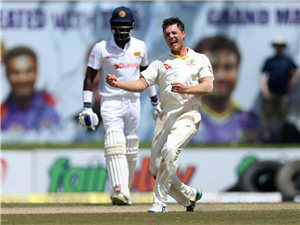