Adam Scott and Marc Leishman have finished as the leading Australians in a share of 14th at the US Open at Brookline Country Club in Massachusetts.

Golf stars Adam Scott and Marc Leishman have found some welcome form ahead of the season's milestone final major to finish as the top Australians at the US Open in Massachusetts.

On another day of tough going at Brookline Country Club, Scott and Leishman each posted final-round two-under-par 68s to jump into a tie for 14th.

At two over for the championship, the veteran pair finished eight shots behind English winner Matthew Fitzpatrick.

More significantly, it was the first top-15 result outside of the WGC Match Play event for both Aussie big guns since the Genesis Invitational in Los Angles in February.

Their major form bodes well ahead of an eagerly-awaited return to St Andrews for the 150th Open Championship from July 14-17.

Leishman, Scott and fellow Australian Jason Day all had huge opportunities to claim the Claret Jug the last time the British Open was played at the home of golf in 2015.

Day led into the final round only to finish a shot shy, Scott hit the lead early on the back nine but faltered down the stretch and Leishman fell agonisingly short in a four-hole playoff with Louis Oosthuizen and eventual champion Zach Johnson.

The trio will get another crack next month, with Scott and Leishman sure to return to the famous Scottish links with renewed confidence.

Scott put himself in the mix on Thursday with a one-under 69 but was left to rue two late second-round bogeys that left too much ground to make up.

"The last three holes on Friday probably really cost me a good run at this tournament over the weekend," Scott said.

"It would have been nice to be under par on Friday night and been feeling like I'm really in contention, but I was on the periphery all week."

After a steady opening nine on Sunday, Scott made three birdies between the 10th and 14th to climb the leaderboard.

Leishman bounced back from his disappointing third-round 73 and had three birdies on the front nine to make a charge, but was unable to keep the run going.

Min Woo Lee was the next-best Australian in a tie for 27th at five over after being unable to deliver another special Sunday round like he produced on his Masters debut in April.

Lee entered the final round six strokes off the pace, giving himself an outside chance of completing an extraordinary family double after his sister Minjee won the US Women's Open two weeks ago.

But the 24-year-old's dreams were dashed early on the unforgiving course, when he followed up a double bogey on the third with bogeys on the fourth and sixth.

Australian qualifier Todd Sinnott ended his impressive major championship debut with an even-par 70 for a six-over total in a tie for 31st. 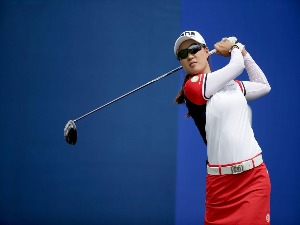