Kuol, 17, has been tipped for big things since capping off an electric debut A-League Men season by lighting up the A-League All Stars match against Barcelona, earning praise from coach Xavi.

But rather than join 20-year-old big brother Alou Kuol, who plays for VfB Stuttgart in Europe, Garang will aim to develop further under Nick Montgomery and assistant Sergio Raimundo.

"Monty and Serg have had belief in me since day one which something I will never forget," Kuol said.

"I just want to be playing consistently and I am very excited to be here alongside a great bunch of boys and can't wait for next season," Kuol said.

"This is only the start for me and I am keen to develop more, learn more and become a better player under Monty and Serg."

Montgomery initially coached Kuol in the Mariners' academy and brought him through for his debut, where he scored in the FFA Cup before gradually building into the ALM season.

"What he has achieved in this short space of time doesn't surprise me as he is a massive talent," Montgomery said.

"Garang isn't fazed by anything and is very level-headed which is why he made Barcelona seem like an easy assignment and, in the process, being an inspiration for all kids in this country.

"It gave our club great pride to see him make the match his own.

"I look forward to working with him for the next two years at the club and developing him further to become one of the A-League's most exciting talents in a long time."

N'gbakoto, a winger, most recently played for Nancy having featured predominantly at Metz, while also having stints at Queens Park Rangers, Guingamp and Panathinaikos. 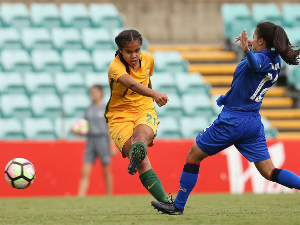