The Warriors will play in front of a full house when they return to Auckland early next month.

The house full signs have gone up for the Warriors's homecoming NRL clash, with more than 25,000 expected in their first New Zealand game in almost three years.

Travel restrictions forced the Warriors to relocate to Australia at the onset of the COVID-19 pandemic and play home games in Redcliffe this year and Gosford for the two years before that.

The Warriors' clash with Wests Tigers on July 3, their first in Auckland for 1038 days, will mark only the fourth occasion Mount Smart Stadium has been at full capacity in a regular-season fixture.

The match has also sold out further in advance than any Warriors regular-season game since their 1995 debut season.

The Warriors were forced to cancel their homecoming game twice, citing logistical difficulties brought on by the pandemic, so CEO Cameron George said the long-awaited return would be "one of the most important and emotional occasions" in club history.

"We're so thrilled having Mount Smart packed for our members, fans, families and sponsors who will at last see the Warriors playing at home," said George.

"The resilience and patience they've shown has been extraordinary and the way they have embraced this occasion has been unbelievable.

"We put up tickets for the embankment at the northern end of the ground earlier this week and they flew out the door while all the stands and corporate hospitality were sold out days ago.

It's a wonderful tribute to our supporters who have shown how much the club means to them."

The game will be the third of club legend Stacey Jones' interim coaching tenure and will be followed by three more home games in New Zealand to round the year out. 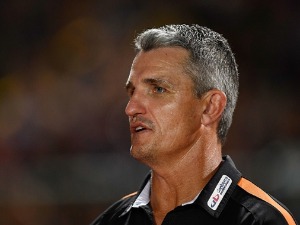