Canterbury's Josh Addo-Carr hopes his previous displays at State of Origin level with NSW have done enough to earn a recall when Brad Fittler announces his Blues squad this weekend.

Ahead of the NRL's Indigenous round, Addo-Carr was in high spirits after missing last week's loss to the Wests Tigers with flu, the club's first game since interim coach Mick Potter replaced Trent Barrett.

Addo-Carr has been an Origin regular for the Blues under Fittler, but while he's scored six tries in 10 games for Canterbury the winger is yet to hit top gear in a side which has just two wins all year.

"Hopefully I get the call-up, I feel like I've been consistent at the Bulldogs and that's what I pride myself on," Addo-Carr said.

"Obviously we aren't winning games but I think that comes down to the team. I work really hard to be consistent.

"It's always a privilege to put that blue jersey on, hopefully Fred (Fittler) will give me a call and he hasn't deleted my number."

The Dogs return to their spiritual home of Belmore on Sunday when they host St George Illawarra.

The venue has been a happy hunting ground for Addo-Carr. He made his debut for Melbourne in 2017 there and scored a double in 2019 when he last visited the venue.

The focus for Canterbury this week has been discipline, with Potter laying down the law at his post-match press conference on Friday and into training this week.

The bottom-placed Bulldogs are second in the competition for errors and third for penalties conceded.

"Mick pretty much explained that the errors and discipline side of things (isn't good enough)," he said.

"When you're giving away six agains and penalties to other teams it's really deflating.

"It puts a lot of pressure on us as a team and that's what we need to fix." 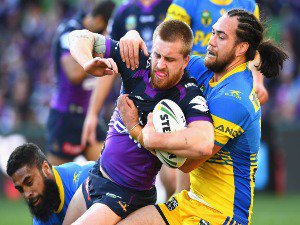