NSW centre Stephen Crichton is keen to make amends after being left red-faced by Maroons magician and man-of-the-match Cameron Munster in Origin I.

After a baptism of fire in his State of Origin debut, Penrith's Stephen Crichton knows the size of the task ahead of him as NSW aim to level the series.

Crichton was a surprise selection on the bench for game one and was only thrown into action when Kotoni Staggs picked up a shoulder injury.

He struggled to get into his groove in his 30-minute cameo and one of his first involvements resulted in him being placed on report for a dangerous throw on Cameron Munster.

The Maroons five-eighth also showed off his cunning game awareness by stripping the ball off Crichton when the Blues desperately went in search of a late try, leaving the Origin debutant red-faced.

"I knew it was going to be quick, but it surprised me just how quick it was," he said.

"I think it is a bit hard (to get yourself into a game) when you come off the bench.

"But you don't want to be complaining about waiting to get on because you know that's part of the game."

The good thing for Crichton is he will have time to show why he is one of the most highly rated young players in the game.

Still just 21 and a veteran of 67 NRL games, Crichton has displaced Staggs as Brad Fittler's first-choice right centre and will start in Sunday's game in Perth.

It sets him on a collision course with Queensland's potent left edge, where Valentine Holmes and Kurt Capewell found joy in the series opener.

Defending at centre is one of the hardest assignments in the game, but Crichton's role has added difficulty - stopping the mercurial Munster who finds himself in career-best form.

"He (Munster) is playing really good footy at the moment," Crichton said.

"The only way we can minimise his involvements is sticking together as a team and not trying to do it as individuals.

"I can't wait to get out there and play again and it's about us getting our communication together." 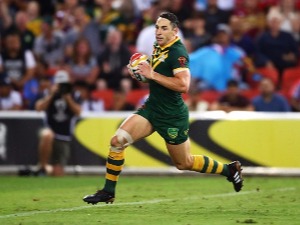