Neville closing in on Wallabies debut

Brumbies' behemoth Cadeyrn Neville has been grinding for a decade in search of a Wallabies debut which could come in next month's England Test series.

Cadeyrn Neville is that close to his elusive Wallabies debut he can practically taste it.

The 33-year-old, 202cm and 120kg behemoth, who spent more than a decade playing for three Super Rugby Pacific clubs, has also trekked over to Japan Rugby League One in search of a Test debut.

After a strong campaign with the Brumbies helping them to the semi-finals, the in-form Neville finally earned a call-up and is now firmly in the selection mix.

"It's hard to sum up all the ways it would be special to me," he told reporters.

"I've had a taste of it in various forms over the years but it's good to just go through the season and be named in that squad and just come in sort of the orthodox way.

"I'd definitely relish it, I'm keeping focused on the work that I still need to do to get there.

Not only does he have the company of fellow Brumbies locks Darcy Swain and Nick Frost in his positional battle, he's also got outgoing Brumbies coach and new Wallabies' forwards mentor Dan McKellar in camp.

"Structure-wise there's a lot of similarity, so that's an obviously big help for us," he said.

"You can come in and there's a few things that's just really the same thing with different names.

"Whenever you got to make a shift, the more you're familiar with it already makes it a lot easier."

The Wallabies will start getting into their work on Saturday with their first field training sessions, having headed into camp on the Sunshine Coast on Thursday ahead of next month's three-Test series against England.

Neville said getting the basics right and not worrying about individuals will hold the Wallabies' forwards in good stead.

"I'm probably not thinking about the one-on-one battle too much, but rather distil it down into different points of contests," he said.

"Where we're going to compete at the lineout on both sides of the ball, maul, scrum, breakdown, carry, tackle, all those sorts of things.

"We're in here 24-7 at the moment, we'll be looking at all the ways we can come out on top in all those little contests." 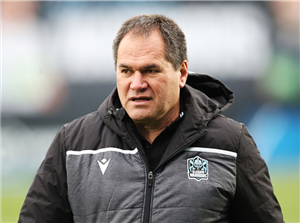