John Millman says Australians don't understand how competitive world tennis is - and believes the top players are the sporting equivalent of the AFL's best.

Millman, a long-time top-100 player on the tour, made his comments in the week when there was familiar disappointment that only one of Australia's eight men's players in the main draw, Jason Kubler, was able to make it into the second round at Roland Garros.

"The state of tennis (in Australia)? I just think Australians have no idea just how challenging it is," he said.

"We have been lucky with Ash (Barty), haven't we? It doesn't come around too often, having the best player in the world play.

"I think it gets lost just how competitive this sport is and how many countries and players from those countries compete in this sport.

"We get a preview of it for one month a year at the start of the tennis summer and it kills me when I hear commentary in those tournaments when we are not celebrating just how good a guy who is ranked 20 or 30 is."

There are a reported 87 million tennis players in the world.

"I did a tweet about (Serbian) Filip Krajinovic being called a journeyman (in the Australian press). The guy's 26 in the world in one of the most played sports in the world. It absolutely blows my mind," said Millman.

"I don't think we do any favours in Australia not saying how high a level that is.

"We are not in the faces every week like your footy players. There are 750 players in the AFL. Then you have tennis, a sport that is played in 180 countries.

"And you start doing the maths and you think, 'If you can get one player into the world's top 100 in tennis, that is the equivalent of probably having the best player in the league in Australia'.

"Being that ranking is the equivalent of being the best player in Australia in footy, in my opinion.

"I am not having a go at footy. Everyone knows that I love my footy. I absolutely love it and I think they're great athletes - and I want that on record that they should get their accolades and support and they should get paid.

"But in terms of how we perceive tennis players in comparison, it blows my mind."

Currently, there are six Australian men's players in the top 100, all of whom Millman - No.91 himself - would consider to be under-appreciated for that considerable achievement.

"In terms of where we are at tennis in the country, I'm hopeful," said Millman, who reckons he's living proof that you don't have to be a world-beater at 17 to make it as a tennis pro.

On his own experiences, he said he'd like to see Australia following the Italian model, with more secondary professional tournaments being held in the country and he'd be keen for a European base to be set up for the use of Aussie players.

"Also at junior level. Have tournaments. Get kids out there competing and make it fun for them," said the Brisbane man.

"I feel like today, it is so serious as a little kid in Australia. I spend a bit of time back home - get it fun again, with lots of little team competitions." 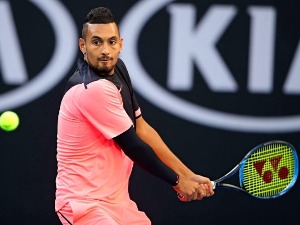