Having first combined to win the Railway in 2014 with Elite Belle, the Williams and Pike combination has been untouchable in recent years with Galaxy Star (2018), Regal Power (2019) and Inspirational Girl (2020) all triumphant in the famous cerise and white.

Of those four, last year's winner Inspirational Girl had started the shortest market elect ($2.60) however Western Empire quickly took over that mantle when jumping the $1.60 favourite on Saturday.

Following the same path as Regal Power in 2019, Western Empire won the Group 2 WATC Derby [2400m] in the Autumn before making his return in the Group 3 Asian Beau Stakes [1400m].

Although unlike Regal Power who was beaten, Western Empire was most impressive winning the feature easily by two lengths.

From the inside draw he began nicely and was able to hold a position just off the speed in fifth, from there it was game over.

Unfortunately the lack of Eastern state visitors detracted from the overall hype of the race (who is he even beating) however it wouldn't have mattered, they would have just partially filled in the daylight between first and second.

Going back to 1980 no horse has won the Railway by further, Slavonic is the next in line winning by 3L in 1999.

In terms of raw times, he is the sixth fastest Railway Stakes winner (1:34.38) during that period.

Last year Inspirational Girl ran 1:33.79 however Saturday's race was run over a second quicker for the last 600m.

Now rated 121 by Timeform he is the equal highest rated winner of the event with two-time winner Luckygray.

For those that aren't up to date on the latest Timeform ratings, here's what a rating of 121 translates to.

All silly hypotheticals of course but as a piece of form that's where his performance sits from Saturday.

In terms of the four-year-old crop he is equal top with Mo'Unga and now finds himself in the Top 10 horses in the country. 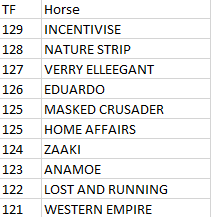 The Group 1 Kingston Town Stakes is his next assignment with stablemate Regal Power the main opposition with star filly Treasured Star sent to the paddock.

Superstar mare Arcadia Queen ran 121 when winning the feature event in 2018 and we now wait to see whether Western Empire can run up to that level again in two weeks time.

What lies ahead after that remains to be seen but if able to travel freely next year Western Empire is sure to make his presence felt on the east coast.

The All-Star Mile and Queen Elizabeth Stakes appear logical targets and with three weeks between runs it looks a tailor-made preparation - bring it on!