This year's Group 1 Derby (1m4f) runner-up Hoo Ya Mal (Territories) will join the stable of Gai Waterhouse and Adrian Bott after selling for £1.2 million at Monday's Goffs London Sale. With an opening bid of £1 million, Gai Waterhouse, Adrian Bott, Johnny McKeever and Go Bloodstock had to see off Marie Yoshida, who was bidding on the phone, to secure the Andrew Balding-trained colt.

Bought for 40,000gns by Ahmad Al Shaikh at the 2020 Tattersalls October Yearling Sale Book 1, Hoo Ya Mal finished third on debut ta Sandown last July before breaking his maiden at York the following month over seven furlongs. He finished second, beaten a nose, in the Listed Flying Scotsman Stakes (8f) on his final start as a juvenile last September. This year the son of Territories (Invincible Spirit) resumed with a third in the Group 3 Craven stakes (1m) and then finished second in the Listed Newmarket Stakes (1m2f) before the Derby.

"He's got a profile that we think will really suit Australian racing, obviously with races like the Melbourne Cup being high up on the agenda for him," said Bott.

"As you know, the racing industry in Australia seems vibrant and healthy with great prize-money around. We want to capitalise on that and this is a horse that we think will be racing at the elite level. We had to be strong on the horse and pay what I thought was a fair amount but I'm excited to get him down there and see what he can do for us."

"We'll have a discussion with Andrew (Balding) and see how he's done after that run in the Derby as we want to do right by the horse first and foremost, but the new owners would be very interested in having an Ascot runner," continued Bott.

"He'll be owned by a syndicate headed up by Sir Owen Glenn's Go Bloodstock."

Hoo Ya Ma was the only lot to break the seven figure barrier, with Crypto Force – a juvenile son of LA Stud shuttler Time Test (Dubawi) – selling for £900,000 to Hamish Macauley Bloodstock, Omnihorse and Amo Racing.

Trained by Michael O'Callaghan, Crypto Force is the winner of his only start to date, breaking his maiden impressively at the Curragh over seven furlongs on June 1 and he holds an entry in Saturday's Listed Chesham Stakes (7f). 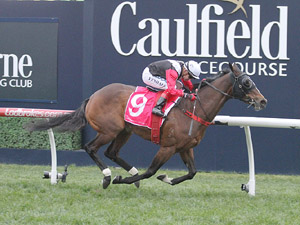