Valley Forge can secure another decent pot by winning the Jenningsbet Northumberland Plate at Newcastle.

Andrew Balding's charge really pointed to his staying potential when landing the Melrose Handicap at York last year and while he could not follow up in another handicap run or when pitched into Listed company, the four-year-old has returned in decent form this term.

Gelded over the winter, he looked in need of his return at Newmarket and he duly took a leap forward when narrowly prevailing in a competitive heat at Haydock.

Having his first try over two miles, Valley Forge was staying on all the way to the line and a 4lb hike does not look insurmountable.

The presence of Trueshan at the head of handicap ensures plenty are running off comparatively light weights and Valley Forge can take full advantage.

Ebro River is on something of a retrieval mission in the Pertemps Network Chipchase Stakes after a couple of disappointing runs so far this term.

He was a Group One winner for Hugo Palmer last term over six furlongs and was certainly not disgraced when stretched to seven furlongs in the National Stakes, coming home third behind Classic winner Native Trail.

However, he failed to sparkle on his final juvenile outing and switching back to six furlongs had yielded no joy in two outings so far this year, coming home fifth in the Abernant before taking fourth in France.

He is by far the best horse at the weights in this Group Three affair and if he can return to anywhere near his two-year-old form, that would be good enough.

Stablemate Ever Given arguably has much more obvious claims at Newmarket, where he goes for gold in the House Of Cavani Menswear Criterion Stakes.

A smart juvenile for Tom Dascombe, Ever Given has made a fine start for Palmer, winning two of three starts so far this term.

After hosing up at Chester, Palmer tried him in the Sandy Lane at Haydock where he finished well beaten over six furlongs behind some fine sprinting types.

Switched to seven furlongs and Listed company at Epsom, Ever Given got back on the right track, beating Oscula by a cosy length with the runner up boosting the form with her own Listed verdict at Carlisle on Wednesday.

Ever Given gets a handy weight-for-age allowance that can help him make up ground on the main players.

Minnetonka made a huge impression on her racecourse bow and can make the leap to Listed level in the Maureen Brittain Memorial Empress Fillies' Stakes.

Trained by Richard Hannon, Minnetonka demonstrated her potential with a seven-length verdict at Salisbury, sprinting clear with the minimum of fuss and looking all over a future Pattern-race contender.

Hannon won this race with System last year and Minnetonka can make it back-to-back wins for the yard.

My Oberon should be refreshed after a break and can kick off his turf season with victory in the Vickers.Bet Midsummer Stakes at Windsor.

He won two on the all-weather earlier in the year, a qualifier for the Mile division in the All-Weather Championships and then the final itself at Newcastle in April.

Those two outings were punctuated with sixth in the Dubai Turf at Meydan, a trip which possibly accounted for his narrow verdict at Gosforth Park.

Westover was an unlucky third at Epsom and compensation could await in the Dubai Duty Free Irish Derby at the Curragh.

It is impossible to say whether Westover would have seriously troubled Desert Crown in the Derby, but there is no doubt he could have finished second granted a clear run as he was making up ground with every stride in the final furlong after struggling to find a route through traffic.

Beaten just a head for minor honours, Westover can prove too good for Oaks winner Tuesday in the Classic.

DOUBLE: Valley Forge and Ever Given. 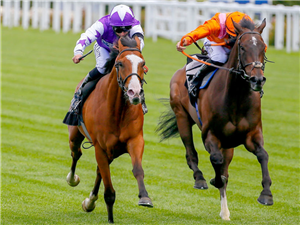