This weeks News In Brief reflects on the passing of superstar Galop Marin and potential targets for top-class horses such as Perfect Power and Vadeni...

Perfect Power confirmed his title as the best three-year-old sprinter in Europe following his success at Royal Ascot in the Commonwealth Cup (G1). The winner of the Norfolk Stakes (Gr2) at the Royal Meeting last year progressed to win the Gr1 double of Prix Morny (Deauville) – Middle Park Stakes (Newmarket). Christophe Soumillon has been his regular jockey and indicated the horse is better on softer going and that the Prix Maurice de Gheest (G1) could be his next G1 target. Based on last Friday's performance, he could remain competitive when competing against older horses.

Former French horse and 2010 Melbourne Cup (G1) winner Americain has passed away after suffering a paddock leg injury. A seventeen-year-old, he had been retired from stud-duties at Swettenham Stud and was in retirement. Originally owned by the Wertheimer Brothers, he won the Prix Vicomtesse Vigier (G2) in 2009 before a disappointing campaign in the United States. He was then sold to Australian interests and commenced a campaign trained by Alain de Royer Dupré which included winning the Prix Kergorlay (G2) at Deauville before travelling to Australia where he won the Geelong Cup (G3) first-up before success in the Melbourne Cup when ridden by Gérald Mosse. In total, he had 33 starts for 12 wins and 7 placings. In 2011 he won two G2 races in Melbourne – the Moonee Valley Cup and Zipping Classic (this was his last win) and finished fourth in that years' Melbourne Cup.

The next start for the Christophe Ferland-trained three-year-old Accakaba will be in the Prix Jean Prat (G1) at Deauville. This season she has finished third in the Prix Imprudence (Gr3) and another third in the Prix du Palais-Royal (Gr3) against older horses. The Deauville straight will suit as she is already a course and distance winner in the Prix du Calvados (Gr2) last August.

Making Moovies finished seventh in the Poule d'Essai des Poulains (G1) following three wins, a second in two G3 contests – the Prix La Rochette and Prix Thomas Bryon and a third in the Prix de Fontainebleau (Grs3). Connections have chosen to give him a summer break before being targeted for an autumn campaign, specifically aimed toward the 1600m races.

Last Wednesday at La Teste-de-Buch, by winning the Prix Precia Molen, Kit de Cerisy presented a first success to the colours of the former jockey, François-Xavier Bertras. He races the horse in a partnership that includes his trainer, David Morisson.

There may be a change of plan for Prix du Jockey Club (G1) winner Vadeni with connections considering running him in the Eclipse Stakes at Sandown (UK) on Saturday week, 2 July. He will need to be supplemented for the race run over 2000m. In 2021 the Prix du Jockey Club winner St Marks Basilica ran in, and won, this race.

Last weekend, the Czech Republic trained Hello Hola Hay won the 42nd Swiss Derby. Racing with the "FR" suffix, he surprised many following a Class 2 victory at Strasbourg. He was purchased for €14,000 at the Arqana October Yearling Sale. There was only one French trained runner in the race, Martial Art, who finished fifth and is trained by Didier and Pauline Prod'homme.

Despite attempts to save him at the Meslay-du-Maine clinic, Galop Marin succumbed to guttural pouch mycosis, a rare but very serious disease caused by a fungus that infects the lining of the guttural pouch. He was a true superstar having won the Grand Prix d'Automne (Gr1) on four occasions. Having come through the operation, he suffered subsequent complications and a relapse with fatal consequences. For jockey Morgan Regairaz Galop Marin provided with him all his Group One successes and he even named his house after him. Galop Marin won 14 of his 51 races, including nine Group contests including the Grand Prix d'Automne (Gr1) four times. He was placed 29 times, a total of 43 podium finishes and won €1,567,061.

Sa Majesté, winner of the Prix Ex Voto at Auteuil in May has been sold to prominent Irish owner J.P. McManus. A third on debut in March, he followed this winning the Auteuil race by 1.25L.

Two years after suffering an injury in the Elitloppet, Earl Simon won his maiden Group One attempting the Kymi Grand Prix in Finland. Driven by Frank Ouvrie he had to survive a Stewards Inquiry to be confirmed the victor. It is the second time trainer Jarmo Niskanen has prepared a Group One winner which was also for Franck Ouvrie. He won the Prix de l'Étoile in 2014 driving Black of April. His time of 1'12''5 for 2100m reflected the wet conditions with the race record of 1'11'' recorded by Carabinieri in 2017.

The seventh round of the Trophee Vert was run on Sunday at Erbray and won by Exauce Nous. Trained by Romain Derieux he set a solid pace in his usual racing pattern of leading or being up close to win the seventh stage of the series. He holds a formidable record on grass having now had 14 starts for eight wins and five placings while winning his past three in succession, all this season.

The current points tally of the Trophee Vert series is: 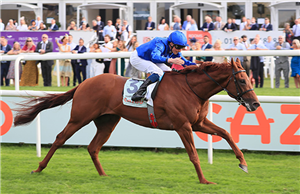