Chris Douglas spent his past three years clearing hurdles for University of Iowa and interning at Google, now he looms as a potential bolter in Australia's Tokyo Olympics track team.

Melbourne-born Douglas, who moved to the US as a young child and is currently visiting Australia for the first time since 2011, produced an eye-catching victory in the men's 400m hurdles at the Sydney Track Classic.

Douglas won in 50.02 seconds on Saturday night, slicing 0.3 off his personal best.

The Olympic qualifying standard is 48.90 and Douglas, who will return to Sydney Olympic Park for the national championships in a month, is confident he can continue to improve at a rapid rate.

"It (the Tokyo Olympics) is obviously the biggest goal of the season and I think if I keep running the way I am then I have a good shot of making it," the 23-year-old told AAP.

"Keep the training up, keep competing hard and things will hopefully fall into place. Every time I race, I get a little bit more shape.

"But it's about looking at one race at a time. I've got some good meets coming up; Wellington on Friday, two weeks off then Brisbane and the nationals."

Douglas is yet to map out his schedule beyond that; nor whether to train in Australia or America should he qualify for Tokyo 2020.

Douglas' previous best time in the 400m hurdles came while representing Iowa at the Big Ten outdoor championships last May, during his final year of a degree in computer science.

Douglas reached out to Athletics Australia last year and made it clear he wanted to continue racing once his studies were complete.

And that he wanted to represent his country of birth and "the country I call home".

Douglas has family in Melbourne and would liked to have visited in recent years but university, athletics and a software-engineering internship with one of the world's biggest and most influential technology companies has kept him busy.

"The past three summers I've been in Mountain View, California interning for Google," he said.

"That's now come to an end, I can't intern any more, but it was a great experience.

"It was a 40-hour week job but as long as you perform well and were getting your work done; they weren't monitoring your hours or anything like that. I was able to get all my training in as well." 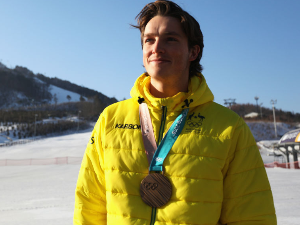