FC Barcelona will make a 48 hour pit stop in Sydney, playing their first game on Australian soil in the club's history on Wednesday.

For the first time in their storied history, FC Barcelona will play in Australia on Wednesday night as part of a fly-in fly-out tour down under.

The Catalan giants land in Sydney on a charter flight in the early hours of Tuesday morning before a game against the revived A-League All Stars at Sydney's Accor Stadium.

They then depart first thing Thursday morning, a little over 48 hours after they arrive.

The A-League will host a joint press conference on Tuesday afternoon with Barca boss Xavi and All Stars coach Dwight Yorke.

A picture opportunity follows in front of the Harbour Bridge before an open training session on Tuesday evening prior to Wednesday's game.

Despite the short time on Australian soil and limited build-up in the A-League grand final week, the Australian Professional Leagues say they have sold over 60,000 tickets.

While friendlies of this ilk aren't usually taken seriously by European visitors, Barcelona have unveiled a formidable squad.

The club's top goalscorers Pierre-Emerick Aubameyang and Memphis Depay are on the plane from Spain as is prodigious talent Ansu Fati, goalkeeper Marc-Andre ter Stegen and Dani Alves.

Veteran defender Gerard Pique has not travelled with the group, while Ferran Torres cannot enter Australia as he has not "completed the required vaccination programme", according to Barcelona.

The contest is the first All Stars game since 2014 and represents Yorke's first foray into management, prior to taking charge of Macarthur FC next season.

"I knew I wanted to go into management but I didn't envisage that Barcelona would be my first ever coaching assignment," he told AAP.

"We know we won't get some of the players we want because of the (A-League) grand final (between Melbourne City and Western United) on the weekend.

"Who doesn't want to play against Barcelona? It would be naive for anybody to miss out. I want to make it clear that I'll use every individual who has travelled to be here." 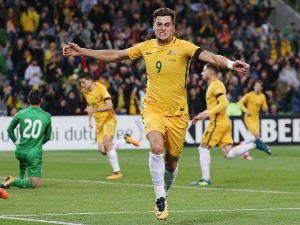