John Millman's nightmare run at the French Open has continued with the Queenslander going down to another first-round defeat against Sebastian Korda.

John Millman's tale of French Open woe has continued with the battling Queenslander failing valiantly for the sixth time to earn his first win in the main draw at his graveyard grand slam.

Handed another trying first-round draw, Millman fought tigerishly as always on Tuesday but American Sebastian Korda, another in the rising battalion of young ATP stars, had just a little too much power and quality in a 6-1 7-5 7-6 (8-6) win.

Millman saved three match points and was on the verge of taking the match into a fourth set before the No.27 seed finally subdued his gallant effort after two hours and 38 minutes.

The 32-year-old Aussie stalwart has won 20 grand slam matches down the years in Melbourne, Wimbledon and New York, but Paris remains his red-dust wasteland for Millman.

Not only has he now lost all six of his main draw matches at Roland Garros, but last year he was also forced to pull out minutes before his opening round match with a back problem.

So landing a first-round match with the No.27 seed Korda always looked ominous, as the 21-year old son of former Australian Open champ Petr Korda powered through to a second-round clash with French favourite Richard Gasquet.

After their contest had been delayed overnight because of late-evening rain, Korda quickly capitalised on his first-game break of serve from Monday, forging ahead to dominate the first set and repel some late resistance from Millman in the second.

Millman never lies down, though, and offered yet more trademark resilience when on the verge of defeat, bringing back a few memories of his four-hour, five-set scrap with Alexander Zverev here in 2019.

Serving for the match at 5-3 and 30-15 up, Korda was rattled by Millman's tenacity, made a couple of errors and popped a double fault.

Then on his own serve, the Australian again demonstrated real guts to repel three match points, the third with a difficult overhead, to level at 5-5.

A brilliant backhand winner down the line inspired the man from Brisbane in the tiebreak but, holding two set points, Millman was left to rue a long backhand on the first opportunity as he came forward to reduce the deficit to two sets to one.

Korda, whose 39 winners to Millman's 18 showed the disparity in their firepower, needed no second invitation, grabbing his fourth match point soon after and forcing the Australian to volley long.

It meant that qualifier Jason Kubler still remained the only Australian man to make the second round, with Alex de Minaur the last man who could join him playing later on Tuesday. 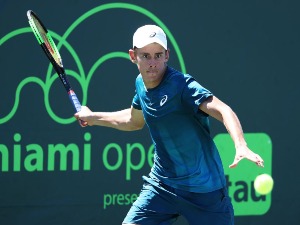