The 160th renewal of the Melbourne Cup will be like no other as it will be run for the first time without crowds in attendance due to the Victorian Government’s Covid-19 lockdown restrictions.

The lack of a live crowd has not diminished the quality of the line up with several feature race winners and placegetters engaged, headed by the Caulfield Cup quinella of Verry Elleegant and Anthony Van Dyck.

However, Timeform weight adjusted ratings point to a welcome change of luck for champion Irish trainer Aidan O'Brien at the 2020 Spring Carnival who has been runner-up in both the Caulfield Cup and Cox Plate with Anthony Van Dyck and Armory respectively.

O'Brien will be represented by rapidly improving three-year-old Tiger Moth as well as the classy stayer Anthony Van Dyck.

Aidan O'Brien, Ireland's greatest trainer, is yet to win the Melbourne Cup, his quest starting in 2006 with Ascot Gold Cup four-timer Yeats who finished seventh under 59kgs.

However it feels like it will only be a matter of time before the Cup is sitting on the mantlepiece at Tipperary having had three placegetters from his next 14 runners– two of those in the past three years.

In recent times, Northern hemisphere bred three-year-olds have excelled in the Melbourne Cup.

Since 2000, nine have ran in Australia's great race for two wins and two placings, the most recent placing was the unlucky Il Paradiso who went down narrowly last year. The previous winner was Cross Counter in 2018.

While he still has some to find on Timeform weight adjusted ratings, Tiger Moth comes into the Cup as a lightly raced Galileo colt, a veteran of just four starts to date, who demolished a Group 3 line up of older runners over 2414m at Leopardstown on September 12th running to a Timeform rating of 120.

That effort came on top of a narrow second behind stablemate Santiago in the Irish Derby who had comfortably won the Queens Vase at his start prior.

That is solid form for his assignment today.

But significantly it has to be said that Tiger Moth is a rapid improver who was re-handicapped to carry just 52.5kgs following his last win. Clearly, he has more to give still, that improvement being built into his predictive rating today.

At the other end of the weight scale, O'Brien will start Caulfield Cup runner-up and Epsom Derby winner Anthony Van Dyck who will carry top weight of 58.5kgs, the same weight he carried at Caulfield.

Anthony Van Dyck returned a Timeform rating of 127 at Caulfield, up a pound to a new peak from his best UK form, but he will need to run to that level and some to get into the frame.

That said, his second in the Caulfield Cup was terrific coming from well back just before the home turn and charging home late, just failing to reel in Verry Elleegant beaten a head.

The biggest hurdle for Anthony Van Dyck is the 58.5kg – the last winner to shoulder this weight was Thing Big in 1975 but in the modern era of the Cup, top weights have found it hard to be competitive. However, champion rider Hugh Bowman combined with his low draw will be major assets for his prospects today.

A win for Anthony Van Dyck would be a history making becoming the first Epsom Derby winner to win the Melbourne Cup.

The leading local hope and danger to Tiger Moth is Russian Camelot, also a northern hemisphere bred three-year-old. He too falls into those positive stats I mentioned earlier.

Russian Camelot heads up the team of last year's Melbourne Cup-winning trainer Danny O'Brien and he looks a terrific candidate.

Russian Camelot has shown above average talent from day one but he confirmed himself the best three-year-old staying prospect in the land when winning the South Australian Derby over 2500m with a rating of 122p.

Russian Camelot comes into the race after four very good runs – all at weight for age, second in the Makybe Diva Stakes, a win in the Underwood Stakes and placings in the Caulfield Stakes and Cox Plate – all races run under weight for age conditions.

Back to Handicap conditions today, down in weight and at his fifth run back from a spell, Russian Camelot looms large. He is sure to be better suited by the open spaces of Flemington and a much quieter ride early which may be on the cards after the barrier draw.

Russian Camelot is already rated a better horse than the stable's 2019 winner Vow And Declare (119) and a rating of 124 puts him in something of a sweet spot for northern hemisphere bred three-year-olds, looking at the recent history of the race.

The Cox Plate has proved to be a solid form reference for the Melbourne Cup and a repeat of his new peak 123 Timeform rating, up two pounds from his best Irish/UK Form, sees him a definite winning prospect. On raw figures he is the highest rated prospect on weight adjusted ratings.

However, the two queries for him are a firmer track and the 3200m.

There is no doubt his best form is on tracks with some give and the Cox Plate surface proved ideal for Sir Dragonet in that regard, however concerns over his ability to handle 3200m may not be such an issue.

After all, he ran to a Timeform rating of 119 as a late three-year-old when fourth in the St Leger over 2922m behind Logician on good ground at Doncaster. Incidentally two lengths behind him on that occasion was Il Paradiso who was narrowly defeated in last year's Melbourne Cup.

Sir Dragonet was outstanding winning a low rating Cox Plate, but the manner of the win suggests he may have a little more to give.

Whether that improvement comes this afternoon is the issue for punters but there is no denying his class for a big handicap race like the Melbourne Cup.

It is also worth noting that Sir Dragonet started favourite in Anthony Van Dyck's Epsom Derby when beaten under a length. He meets that galloper a hefty 3 kgs better this afternoon, adding further claims to his winning prospects.

Last Campaign Verry Elleegant "came of age" and started to realise the enormous promise she showed as a young filly.

This preparation she has carried on where she left off in the Autumn, winning three of her four starts including the Turnbull Stakes and Caulfield Cup in her most recent two outings including a peak Timeform rating this campaign.

That presents an excellent platform to launch her Melbourne Cup bid from and with another three pounds in hand from her career best rating in the BMW Stakes last Autumn, she will again feature as a strong wining chance.

For multiple players three horses worth a thought for inclusion are Steel Prince, Ashrun and Oceanex. The three are all fifth run back from a spell into the Cup and coming off last start career peak rating efforts.

Even though he has not fared well in the barrier draw, Steel Prince returned to winning form in the Geelong Cup which is generally a good guide for the Melbourne Cup. He can bounce off that effort today.

Oceanex gained a "golden ticket" to the Cup when she won the Andrew Ramsden in May and she caught the eye with a last start third in the Moonee Valley Cup. Interestingly her record fifth run back from a spell fits very well for her form profile having won two of her three attempts. She is at very big odds and must improve further, but she is a play for the multiples.

It is no fluke that Andreas Wohler is back in Melbourne with Ashrun – he knows what it takes to win the Cup having prepared Protectionist for his 2014 victory.

Wohler thought enough of Ashrun's chances in the Cup to personally come to Australia. After doing quarantine for two weeks due to Covid-19 restrictions for overseas visitors, Wohler arrived in Melbourne by road in the nick of time to see Ashrun stage a herculean effort under 61kg to win the Hotham Handicap at Flemington on Saturday and gain a berth in the Cup field.

The win by Ashrun was better than the bare form suggests and if he runs to that this afternoon, Wohler's trip may not be in vain. He rates as a strong lightweight prospect.

Enjoy a fascinating contest in a most unusual year. 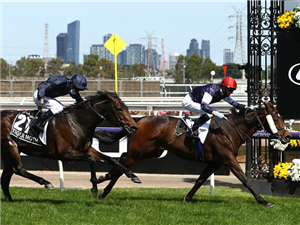